As some of you may know, I currently only own Nintendo Consoles. I am planning to make a leap soon and purchase a PS3. “What games are you wanting for it?” you ask. Well below are a list of the games and why I am interested in these games

Twisted Metal- Like gamers my age, there was a great divide between friend and friend. I had an N64 and my friend had a Playstation. We would have little gamer arguments and claim our system was the better one. It was all good though cause we would play each other’s consoles. The Twisted Metal games were pretty much on constant spin for a good while. It was fun and awesome. Explosions and mayhem… all the things a young man could dream of. So, naturally, I want to see how the franchise has evolved.

Modnation Racers- this game had me interested because it was a kart racer… when I realized you could creat tracks and cars and all those things it had my attention. I am a super-sucker for user created crap (I mean that literally cause there is a lot of crap out there). I want to throw my hat in the ring and see what kinda junk I can create

God of War Collection- I played one of these, don’t remember which one. I liked it. Nice button mashing and blood and carnage. Should be fun.

Unsharted: Drake’s Fortune- This looks like a cool game. Nice graphics and action. Treasure hunting is involved (I believe) and I have never really done that in a video game that wasn’t point and click.

Infamous- This just looked cool and lots of people seem to like it. I think you are that one dude from the movie Chronicle and you are mad and doing things a mad person would do if he had powers.

Prototype- ummmmmm I saw this and it looked kinda cool. The guy seemed to have some sort of Spawn-esque powers so that is really dope.

3D Dot Game heroes- Link to the Past in the present and on another console.. why wouldn’t I like it?

Ratchet & Clank Future: Crack in Time- I always wanted to try out this franchise and so I just looked to see which one was the cheapest on Amazon -_- If there is another that you think I should get let me know 🙂

Killzone 2- Nice exclusive shooter for the Sony console. Interesting design and cool looking guns n such. Am I right?

Lollipop Chainsaw- I love zombies and I love Suda 51… I played this game once and I thought it was fun. The music is one of my favorite parts of this game. It is quirky and weird and twisted. Fun times 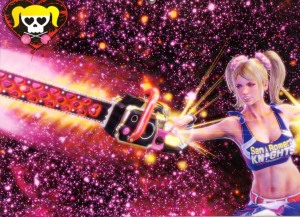 Red Dead Redemption- This game is the bee’s knees… Best western game ever made. Big and expansive and amazing and fun. Great story and dialogue… can’t wait to seriously sink my teeth into this one.

Red Dead Redemption: Undead Nightmare- This is just as great as the original but it has zombies. To me that actually makes it better.
Heavy Rain- this game has been on my radar since I heard about it. Point n click and awesome. I hear it has a good story. I dont really know what to say about it cause I have kept away from anything that is said on it cause I don’t want it to be spoiled for me.

Scott Pilgrim- When I had a 360 (before it red-ringed) my daughter LOVED this game. I gotta get it again cause it is such a great beat-em-up and the music is fantastic. If you didn’t already notice: the intro music to our podcast is one of the songs from the game.

anyhow… that’s my list. If you can think of anything else I should get eventually let me know in the comments section. Thank you 🙂